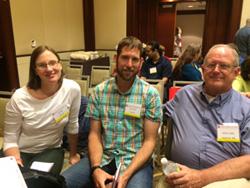 Steve Coffin considers himself lucky. Diagnosed with PNH in 2015, he is  grateful that he has responded well to eculizumab (Soliris®) treatment. “I’m incredibly fortunate,” he said. “It’s doing exactly what it’s supposed to do.”

Steve, a 34-year-old avid runner, always lived an active lifestyle, but he had also sometimes experienced unexplained issues with fatigue over the years. In February, after a bout with the flu, he woke up at four in the morning with severe abdominal pains. “Within three or four breaths, I knew I had to get to the hospital,” he states.

The hospital ran test after test, but it wasn’t until a couple of months later, that he was finally diagnosed.  In early June, Steve received his first treatment at the Dana-Farber Cancer Institute in Boston. He vividly remembers the experience because his second daughter had just been born. One minute, he was holding his new baby; the next he was downstairs getting a treatment that he hoped could save his life.

For many people, learning about PNH might be a frightening experience, but the skills involved with researching the disease and its treatment has dovetailed with Steve’s previous career as a biology teacher. “Science was always my interest and my passion,” he remembers. “I think it helps that I’m not intimidated by the language and the pictures and the charts.”

Eculizumab has worked well enough for Steve, but he is eager to stay on top of the latest research and to learn about possible new treatments in the future. “You never want there to be only one option,” he says.

In the months following his diagnosis Steve has become involved with the Aplastic Anemia & MDS International Foundation, having viewed a number of webinars, and in the fall of 2015 they attended the AAMDSIF patient conference in Boston.

An active lifestyle is very important to Steve, who still runs as much as he can, though his wife doesn’t always approve of the physical exertion. “You take what your body gives you,” he states. Sometimes he’ll feel good and run for 10 miles, but other times he’ll take a day off.

Going forward, Steve says, the biggest downside of living with the disease is the unknown. Research about PNH and its treatment has made significant strides in the last few years, but it’s difficult for him to get a good fix on what is in store years down the road.

Knowing as much about PNH and eculizumab as he does, however, Steve still considers himself to be on the luckier side of the spectrum—even if not everybody understands what he means by ‘lucky’ in this context. “My father cringes every time I say that,” says Steve, with a chuckle.