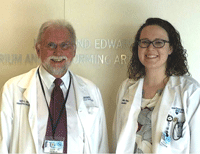 It was August 2011, two days into the fall semester of my junior year of college at Penn State. I was excited to be surrounded by friends as we ran a booth for a fall fair when I got a phone call from a nurse at my primary care doctor’s office. She sounded concerned, so I quickly tried to weave my way out of the crowd to a quieter environment when I heard her say “are you bleeding right now?!” How does one respond to that kind of question? I replied, “No. And why?” She told me, “You’re extremely anemic. You need to see a hematologist as soon as possible and if you start bleeding go to the emergency room immediately.”

I thought back to the routine blood work my primary care doctor had ordered because I was covered in bruises at my last physical. I’ve been pale and accident prone all my life, so that came as no surprise to me. But I kept being turned down when I tried to donate blood because my iron was too low. I was really tired lately and really winded when I walked up two flights of stairs. I was also getting nosebleeds more often.

But to me (at this point), anemia just meant taking iron pills, so it came as a surprise at my first visit with the hematologist in State College, when he told me he needed to get a sample of my bone marrow the very next day. It took a full week until the marrow test results came back. The good news was that I didn't have cancer, but they also couldn't identify what I did have.

Next, I started the process of getting a diagnosis. My blood counts were low enough to be alarming, but never so low that I required transfusions. My counts were not improving over time, but all of the many diagnostic tests they ran were coming back negative. I was then sent to see Dr. Witold Rybka at the Penn State Hershey Cancer Institute and finally, Dr. Neal Young at National Institutes of Health. I was eventually diagnosed with moderate aplastic anemia. Dr. Rybka assured me my counts were low but stable, and that we would follow the “watch and wait” protocol, which lasted for years.

There were many difficult days, and some were more difficult than others. Fatigue would set in quickly, and it took everything I had just to get to class, get my homework done, and fulfill my obligations as the area administrator for Young Life of Centre County, which is a Christian ministry for high school and middle school students. Through it all, I was committed to finishing school on time because I had bigger dreams of becoming a physician assistant. I graduated from the Penn State Schreyer Honors College in May of 2013. Two weeks later I started in Lock Haven University’s Physician Assistant program.

I feel lucky to say that I never required treatment for my aplastic anemia. I went into spontaneous remission in March of 2014 and I’ve been holding steady ever since. Throughout my medical education, I always felt a connection to the hematology and oncology field and was able to complete a clinical rotation in this specialty. I felt closer to the patients I was seeing and felt a deeper sense of purpose.

When a job opened up at the Penn State Hershey Cancer Institute for a hem/onc physician assistant, it was almost too good to be true. I refused to get my hopes up but decided to submit an application. When they called to offer me the job, I was overjoyed. I now have the opportunity to work for the same team that took such great care of me over the years. I was very excited to join them and, more importantly, join the fight against cancer and blood disorders.

Though this illness has been the hardest thing that has ever come my way thus far, it has also allowed me to rise to the challenge and realize my own strength. Sometimes all you have is the hope that things will get better, and sometimes that’s really all you need. Because there were lower lows, I learned to appreciate the good times that much more. There have been many blessings that have come from this diagnosis, the greatest of which has been the way my family and friends came together to be such a strong support system. I cannot say thank you enough to them and the amazing doctors who took care of me.

This is a saying I keep in my white coat every day in honor of the patients I have the privilege to help care for: “The most beautiful people we have known are those who have known defeat, known suffering, known struggles, known loss and have found their way out of the depths. These persons have an appreciation, a sensitivity and an understanding of life that fills them with compassion, gentleness and a deep loving concern. Beautiful people do not just happen.” – Elisabeth Kubler-Ross