My Encounter with Aplastic Anemia 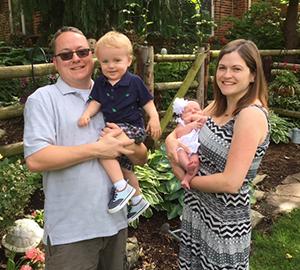 In 2007, when I was 25 years old, I started to get winded going up a flight of stairs. I also began having two hour long nosebleeds, and I knew something was wrong. I had my bloodwork checked and shortly after my doctor told me to go to the hospital right away because my blood counts were extremely low. I had no idea what that meant at the time, and wasn’t overly alarmed. Two weeks and two different hospitals later, I was diagnosed with something I had never heard of, severe aplastic anemia. They told me it was life threatening and there was no cure.

Nothing in life can ever prepare you for that sort of news and I struggled with my emotions a lot. I was treated with ATG and cyclosporine and sent home. My life, which had been all about working at my human resources job, happy hours with friends, and spending time with my boyfriend, T.J., had turned into hospitals, weekly red blood cell and platelet transfusions, and lots of fear. I was treated at Barnes Jewish Hospital in St. Louis. About six months after ATG we had to try it again because it wasn’t working. This time I responded better, and my counts were able to stay above transfusion level for a little over a year. T.J. and I got married in 2009 and enjoyed an amazing Hawaiian honeymoon.

A few months after the wedding my doctor wanted to slowly take me off cyclosporine which caused my counts to fall significantly and I was transfusion-dependent once again. They sent me to the NIH for a clinical trial of eltrombopag, which after a number of trips back and forth from my home in St. Louis to the NIH, we learned it did not help me. The time had come for a stem cell transplant. My brothers were not a match for me, but thankfully, Be The Match found a 100% match donor.

I had my transplant in October 2011 in St. Louis. At the 100-day mark after the transplant, as I was anxiously waiting to go back to work, my doctors informed me that my transplant failed. My family and I were devastated and I took it very hard. My doctor said they harvested enough cells from my donor the first time so we could try again. While waiting for them to determine a course of care, my white blood count bottomed out and I developed pneumonia. I was hospitalized for a month and amazingly beat the pneumonia before the transplant finally happened in March 2012. I had to lose what little hair had grown back again and went through tougher chemotherapy and radiation. I suffered from the BK virus, C-Diff and some graft vs. host disease. Despite all this, it worked! Seven months later, after not working for an entire year, I was once again back in human resources and feeling like a regular person again.

All my life I dreamed of being a mother. The first question I had when I got sick was “can I still have children?” It’s a question I’m sure many young female patients have. Before my first transplant, I had a fertility doctor remove one of my ovaries and also harvest some of my eggs to preserve them from the intense chemotherapy and radiation. It was expensive, but the peace of mind it gave me helped me get through everything.  At the two year mark after my successful transplant, I went to have the ovary put back in, but much to my surprise, the doctor said the ovary I still had looked pretty good, and to try naturally with that one before going through surgery again. Five months later, I was pregnant!  T.J. and I welcomed our miracle baby Isaac in May 2015. In April 2017, we welcomed a second miracle, our daughter Eleanor.

I believe my story shows that no matter how many hurdles this disease can throw at you, you can overcome. Having my family and friend support system, and reading inspiring stories at AAMDSIF, helped keep me strong. Life is now very good!