A Mother and Daughter Awareness-Building Team Get to Work 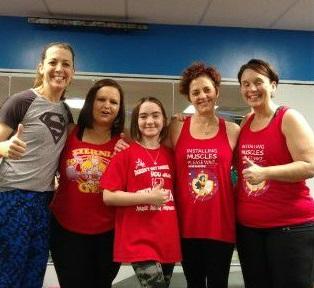 “Emma was active in raising awareness for bone marrow failure even before her arrival at NIH.” – Lydia Seiders

I knew from prior experience with advocacy for other Illnesses, that “t-shirt advocacy” really works – they are great conversation starters. After I had read and re-read AAMDSIF’s patient guide, I felt ready to begin advocacy for aplastic anemia. I knew I could send anyone to their website for any questions I couldn't answer.

Getting started with T-shirts

Through social media, we challenged our close friends and family to help support the Foundation by purchasing on their T-shirts, and this turned out to be a hit.

After reading more on the website about clinical trials and what other patients were doing to raise awareness, Emma made two statements, "Mommy, I want to design my own shirt. I want to bring attention to the cause from within my own fight." These decisions would lead to many things, but she had not yet started treatment and our focus needed to be on that first.

During her first inpatient stay at NIH for initial treatment, one of the things that helped get her through the routine was planning her own t-shirt, and I began my research for establishing a non-profit of our own. Emma was released and later readmitted, but she kept planning while I researched how our nonprofit could be a force for good in the lives of others coping with aplastic anemia. AAMDSIF had already helped us cope with Emma’s situation, but how could we help others?

Emma meticulously designed her t-shirt as I thought about who would receive any funds we raised.
We once again launched a social media challenge. Her t-shirt sold well nationally and we received some requests internationally through her Facebook group.

A different kind of birthday party

In the beginning stages of treatment, Emma remained neutropenic for several months and when asked what she wanted for her birthday, she once again chose to support AAMDSIF and work to raise awareness. She started her "joke of the day" campaign on Facebook, leading folks back to www.aamds.org and encouraging them to help support the cause by purchasing a shirt.

Because Emma was neutropenic, we couldn’t have a regular birthday party for her. Instead, we made over 200 red and white cupcakes, and along with red and white balloons, took these to NIH not just for the medical staff -- she wanted awareness to reach other staff who may not know about bone marrow failure.

We started at the security check-in and went through ticket validation, up to various services and inpatient units, and then back to the day hospital. With each opportunity to hand out cupcakes, we spoke about her condition and encouraged people to purchase a shirt to help her raise funds for AAMDSIF.

Our first event was my sister’s idea called “Superheroes for Emma”, raising funds both for AAMDSIF and for us.

AAMDSIF sent materials and their awareness bracelets. The two-day event took place at an exercise facility near us. We held a bone marrow swabbing event, and an NFL player attended. This was covered in the local media, and there was a spinoff fundraiser at Skyzone Trampoline Park called Jump for Emma.

Emma’s condition was finally stable enough for her to return to school. When meeting with the office staff, she requested an opportunity to speak to her school regarding her condition. They allowed us time to make an entire presentation to staff and students.  We brought educational materials provided by AAMDSIF and handed out bracelets. Emma personally encouraged speak to their parents about going to the website and reading for more information.

During the planning of Superheroes for Emma, we were able to work closely with the Washington County School District Superintendent’s office.  Emma’s event packets were sent to all 26 elementary schools in Washington County, one of which chose to take part in a fundraiser and again the local news and newspaper were there to cover our story.

Because of the success of the first Superheroes for Emma we wanted to make it bigger for the following year. We brought attention to the event throughout the Hagerstown community and were also on live TV -- Good Morning Washington --  through our partnership with Be the Match and The National Kidney Foundation’s Organ Awareness tournament. This all took months of planning and while some things fell through, others went as planned and created more opportunities for awareness.

At the Maryland State Police Barracks, Emma spoke to troopers along with deputies from the Washington County Sheriff’s Office about aplastic anemia and challenged them to donate blood at her upcoming event. This visit was even covered by the local news station, WHAG.  The local newspaper, The Herald-Mail, also noticed our efforts and interviewed us for a feature article that appeared on the front page of its LifeStyle Section.

Despite of all our awareness activities, we knew we wanted to connect personally as friends and advocates with families of newly diagnosed patients. This would soon take us in a new direction.

Emma was diagnosed on the 7th of March so her plans were made around the number 7 – something on each day of the week.

This again sparked interest from the local news station and Emma’s Grand Finale event was featured on the news. We also had Emma’s Be the Match rep there conducting a bone marrow swabbing drive while children had their faces painted by Two Sisters Painting. The entire museum was decorated red and white and a scavenger hunt involving facts about aplastic anemia taken from the educational material provided by AAMDSIF.