Ashley and Alayna: A Mother's Story 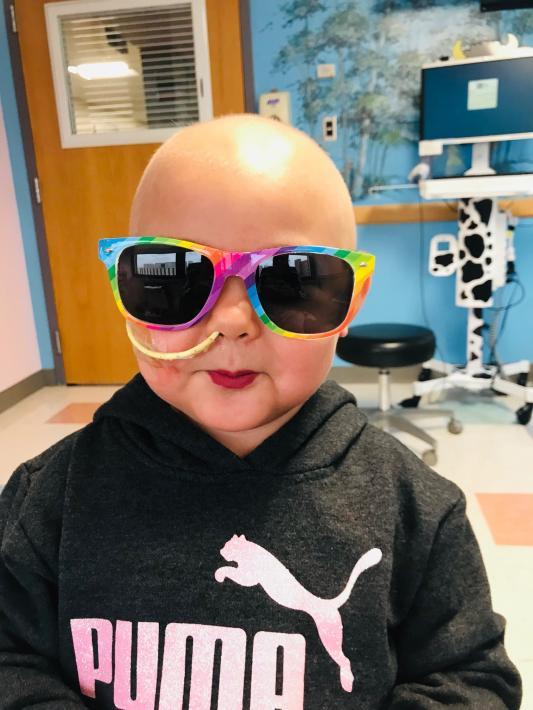 September 16 through December 20 will stand out in Ashley’s mind.

These are the days she spent in the hospital with her feisty three-year-old, Alayna, for conditioning and bone marrow transplant.

The summer of 2019 was already big with a wedding to plan.  The toddler and her baby brother were enjoying everything that small ones do, including riding dirt bikes with Daddy.

When an unusual rash showed up, Dad took her to the pediatrician’s office.  Although the physician who saw Alayna that day wasn’t the usual doctor. Daycare didn’t know of any falls or unusual activity either, so the doctor sent them home with a reassurance that it wasn’t significant yet.

Two weeks later, a bruise reappeared and kept growing in size on Alayna’s back.  Alarmed, Ashley and Chris made arrangements to call the doctor on Monday; it was a Friday afternoon and the wedding was the next day. Alayna was acting completely fine so that was reassuring to them. At the wedding, the three-year-old danced the night away, joyously. In the morning, though, many more bruises appeared.  The next day, petechiae, which appeared as a rash, covered her body. Ashley and Chris got Alayna into the doctor and the pediatrician ordered lab work, stat.

At the hospital, the test showed a platelet count of only 7,000.  Alayna needed more lab work immediately, so they were taken to the oncology ward for the night. The busy toddler had to slow down enough for the IV platelets overnight.  The morning sun brought a bone marrow biopsy.

Because Alayna had no symptoms and her platelet level was restored to 79,000, she was sent home to wait for the biopsy results.  Although the follow-up was scheduled for two weeks later, the petechiae rash returned, with a lowered platelet count and the need for more platelets again.  Another week went by with more rash and more platelets.

Finally, the results of the biopsy returned with the diagnosis: aplastic anemia.  Looking back, Ashley realized how she only heard the words, “treatable” and “anemia” until the drive home, when the quiet allowed her to reflect.  Then fear crept in.  The treatments sound so harsh! What if it doesn’t work?

A mother’s fear gave way to a thirst for knowledge.  Google and Facebook groups showed mothers, families, and patients just like them.  She went to the next day’s meeting with the transplant coordinator knowing some, and learning more.  Still, the gravity of the disease and treatment hadn’t sunk in yet.  Slowly, the worries emerged. What if her brother Mikey wasn’t a match?  What would happen?  How can it be fair for a beautiful, energetic, precocious little girl to have a disease this serious with treatment this difficult?

Ashley says that the next three weeks were the longest of her life. Alayna’s weight dropped. Her gums bled.  She needed blood and platelets each week. In the midst of this, Ashley had to give her injections of Neupogen to stimulate the growth of white cells and yield better ANC numbers in preparation for the bone marrow transplant.

Finally, at the end of August, the call came. Mikey was a 100% match! The transplant could go ahead!

Ashley was thrilled. She had researched transplant enough to know that a sibling match was the preferred match, so the odds were better for success and full life for her daughter.

During all this time, Alayna stayed her funny, happy self.  Ashley worked to educate her as much as a bright toddler could understand, and the little girl even understood hair loss and how to rock the look!

The rush began towards the transplant.  September 16 the port was introduced and Alayna entered isolation, with only immediate family allowed.  As preparation for transplant continued, both parents shared the task of being with Alayna, even though it was hard to watch all the needles and discomfort.  Sometimes Ashley would cry in the shower, or she and her husband would cry together, thinking over how one so small could be afflicted with a disease so difficult to understand.

Although Ashley knew that while her daughter was in treatment that she couldn’t give attention to her son, she still knew it was the best option she had.  Fortunately, her son’s even, jolly, temperament meant that while Grandmom was tending him, he didn’t act particularly upset at the changes in schedule and his mother’s attention.

Alayna had very little trouble with the chemotherapy or the transplant itself. She was fatigued as the day of transplant approached, but had few days of nausea and discomfort.  On Transplant Day, Ashley felt torn: both children were having a day when they wanted their mommy, with both feeling down.

The whole family came through the tough days. After 31 days in isolation, Alayna with her mom went to the local Ronald McDonald House for monitoring and restricted exposure to other people.  The little girl recovered so quickly that she was allowed to return home early!

In the following months, Alayna has returned to her cheery, outgoing nature. Her parents monitor carefully, as do her doctors. She remains ahead of schedule for all the targets post-transplant.  The entire family is starting to relax after the ordeal.

Ashley has several recommendations for families who find themselves in a similar situation. First, she says, “Always reach out!” She advises that holding in all your worries and fears breaks you down, so do let others in on how you are feeling.  This is, she says, just a bump in the road and you will get past it. There will be setbacks, but you will make it.  In addition, she advises, “Celebrate every victory, no matter how small!”  Also, be genuine with yourself, express how you are feeling, and don’t be afraid to ask for help!